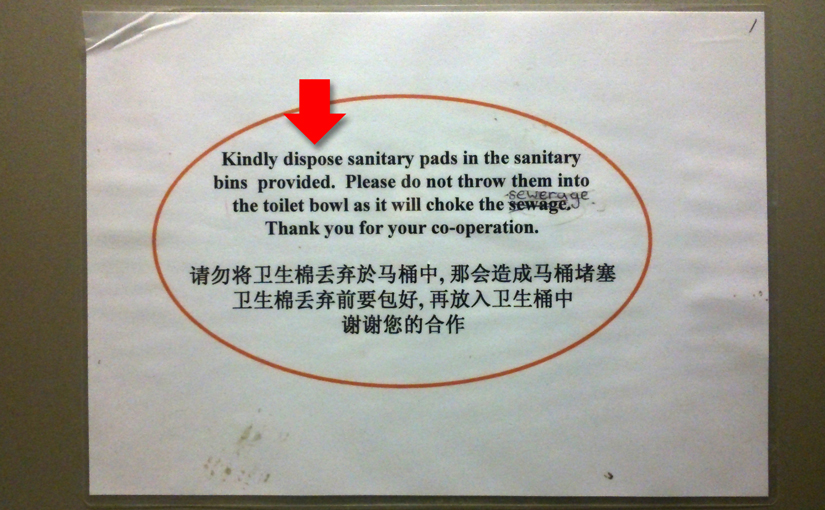 Dispose vs. dispose of

Kindly dispose sanitary pads in the sanitary bins provided. Please do not throw them into the toilet bowl as it will choke the sewerage. Thank you for your co-operation.

There are several things I’d like to point out about the sign, including the use of ‘dispose’. See below for details.

What’s weird in this text?

You might say that the hyphen in the word ‘co-operation’ is weird, but I don’t much care whether there is one or not. In general, I’m for getting rid of hyphens. I’m always annoyed when I have to spend time figuring out whether the truly appropriate convention is to use one or not to, and most people probably don’t care. Personally, I like it when words are made up of letters only (email), not letters and punctuation marks (e-mail). In my very American opinion, punctuation is to be used between words, not within words (BrE has ‘no-one’ and ‘ice-cream’, apparently).

Let’s ignore the slightly awkward adverb ‘kindly’ there at the front; it serves the same pragmatic discourse function as ‘please’ and, like ‘please’, has no syntactic or semantic function whatsoever.

Someone has gone and changed the US term for ‘sewer system’ (sewage) to the British one (sewerage). I’d just have written ‘sewer’, or—even more likely—just ‘pipes’ or ‘drain’.

I question the use of ‘it’ in the second sentence. My gut tells me the word should be ‘they’ (referring to the pads), but I think the intent is for the word to refer to the act of throwing the pads into the toilet bowl. In that case, the sentence should really say: “Please do not throw them into the toilet bowl as doing so will choke the [whatever].”

The main point of the post is to highlight the irksome use of the verb ‘dispose’ without the necessary ‘of’. I have seen and heard the verb used in this way many times, and it has always bothered me, but I wasn’t sure whether it was perhaps British or just wrong. I’m now convinced it’s wrong.

It often happens in Singapore that phrasal verbs, the bane of English learners the world over, are obliviously misused. The verb ‘throw away’ often becomes just ‘throw’. An air freshening product claims it can ‘rid odour’ rather than ‘get rid of odors’. It should come as no surprise that the ‘of’ in ‘dispose of’ is entirely dispensed with.

Do not throw sanitary pads into the toilet bowl as doing so will block the drain. Please dispose of them in the bins provided. Thank you for your cooperation.

Other uses of ‘dispose’

It’s true that there are uses of verb ‘dispose’ that do not require ‘of’.

Being overweight can dispose you to Type 2 diabetes, but some people are more genetically disposed to diabetes than others in the first place. (Certain factors make you more likely to get the disease.)

She sent down a message saying she was indisposed, as she did not want to receive him that afternoon. (She was not inclined to welcome him as a guest.)

The general disposed his armies so that the strongest legion of foot soldiers was between the cavalry units. (He arranged his armies in a certain way.)

This last use, meaning ‘to place’, is the most similar to the phrasal verb ‘dispose of’ meaning ‘throw away’. Surely we could politely ask people to dispose (place) sanitary pads in the bin? No! What a general does to arrange his troops requires thought and care about the exact placement of the soldiers. If you want to seem to care at all about articulate word use, it is wildly inappropriate to say “dispose the sanitary pad in the bin” because no one will take time to carefully arrange the bin’s contents. (Yuck!)

Here are two good dictionary pages about ‘dispose’ and ‘dispose of’.

I found a page that claims you can use the phrase ‘dispose with [something]’ to mean ‘settle [something]’, but that sounds horrible to me and I don’t see any legit examples online.

For the sake of completeness, there is a slang use of ‘dispose of’ which means ‘to eat or consume rapidly’.

The soccer team disposed of four large, extra-cheese pizzas in no time flat.

It doesn’t mean they threw the pizzas in the trash (because they’re all lactose intolerant or on the Atkins diet or something), it means they quickly ‘took care of’ or ‘managed’ the pizzas by eating them. It’s a kind of humorous reverse euphemism. You know, the way your dad might offer to ‘assist’ you in ‘handling’ that chocolate ice cream in front of you after he’s finished his own. No thanks, Dad; I think I can cope.