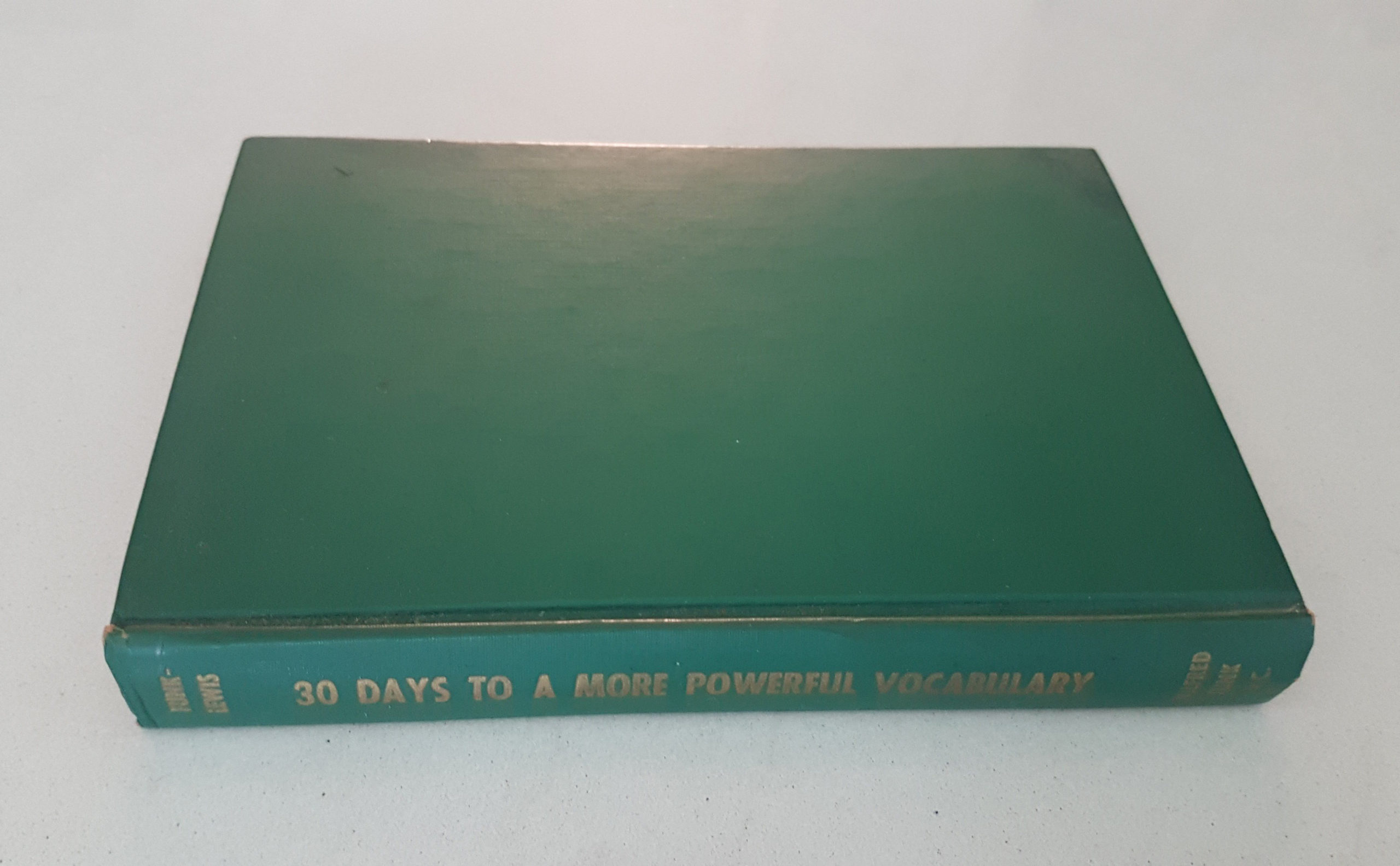 30 Days to a More Powerful Vocabulary

This book was printed in 1950. It’s in decent condition, although the pages are a little brownish. It has a pleasant smell, like an old library. The content as well as the paper, the fonts, and the typesetting make for a kind of armchair time-traveling experience.

Resist the urge to cringe.

Some of the content would be seen as objectionable from the standpoint of more sensitive modern attitudes towards race, culture, class, and gender.

However, it’s useless to blame the book for being the product of its times. No one could expect the authors to demonstrate clairvoyance in the process of, as they say nowadays, “curating” their “content”. In fact, I give the book credit for pointing out that language is constantly in flux, and that words are dependent on the whims of those who use them, and, if neglected, fade into obscurity.

There are some words which are and always have been obscure. At the beginning of Chapter 9, I was pleased to meet with my old friend ‘syzygy’, a word which is perhaps best known for being practically useless. I learned it from a children’s book called Wally the Wordworm, and have only ever seen it used once for its intended purpose (in the English translation of Liu Cixin’s Three-Body Problem). The authors of 30 Days use it to mean “an immovable union between two brachials of a crinoid”. Their idea is still a conjunction or alignment of two or more things—usually astronomical bodies; in this case parts of a sea creature—but they only brought it up to show that not all words are equally worth bothering about.

I learned about crinoids as a child, though for a long time I only knew that they existed and not what they looked like. I used to find coin-like sections of fossilized crinoid stems in my grandparents’ garden, hundreds of miles from any present-day ocean.

The words are listed in the book with their pronunciations, and readers are encouraged to practice saying them aloud. I suspect nobody did that. I also suspect that few people completed the written activities; my copy is pristine.

I did read the pronunciations in my head, though, and some weren’t what I was expecting.

I’d like to discount that third theory, but the least likely explanation is the second one. Whether I’m right or wrong, the book is probably right. The authors got the pronunciations straight from a contemporary dictionary.

Was it worth reading?

The book contains information and exercises that are theoretically valuable. To whom and for what are they valuable, though?

I think it’s possible to go about learning words on purpose, and certainly I benefited from English lessons in school that included explanations and quizzes like the ones in this book. Still, personally I feel like it’s better, if slower, to just… read a lot.

The tone of the book is very gentle and encouraging, to jolly along the presumably self-conscious, reluctant, and intimidated reader. It’s a bit patronizing. I’ve never understood why an adult would wake up one day and decide his or her vocabulary needed to improved, and then go buy a book about words. Yet that’s who the book seems to be pitched at.

I think most people buy books about stuff they’re already good at and interested in. I have dozens (hundreds?) of books about language, and probably only one on fitness training, something I’m obviously much less excited about. It could well be argued that words are things more likely than physical exercises to be found in books in the first place, but that’s missing the point. I have a video about Helvetica—you know, the typeface?—and zero videos for learning aerobics, yoga, or weight training.

Still, despite the fact that the book was not written in my time, nor for owners of shelves groaning with dictionaries, the book did manage to teach me a word or three.

Less familiar than syzygy is the word “mulct”, a latinate word meaning “to cheat or tax”. This is a venerable but dying word, apparently.

Another new old word for me was “futilitarian”, meaning a kind of extreme defeatist.

Evidently, people were happily and annoyingly minting portmanteaus long before Freakonomics and “guesstimate”. This blend of ‘futile’ and ‘utilitarian’ was created no later than 1827.

The German compound word “weltschmerz”, meaning “world-weariness”, was also new to me:

The word apparently has literary origins, but it seems appropriate for veterans of 20th-century global political turmoil.

On a related note, the book’s plea for the reader to continue working on the admirable task of vocabulary-building ends with the assertion that a stronger vocabulary contributes meaningfully to national unity and helps make the world safe for democracy:

[The American language] has a beautiful unity throughout our land. No other country in the world, one tenth our size, can show such linguistic solidarity, nor any approach to it. This American language is our creation; it belongs to us, and the more we master it, the more secure we will make our democracy.

Yeah. That’s a bit overblown in several respects, I’d say. But I didn’t just survive World War II, which was very much on everyone’s minds around the time the book was written.

How many of these words do you know?

If you want to power-up (level-up?) your vocabulary, here are the 450 words the book recommends.

I thought this was going to be a short blog post. I was wrong.