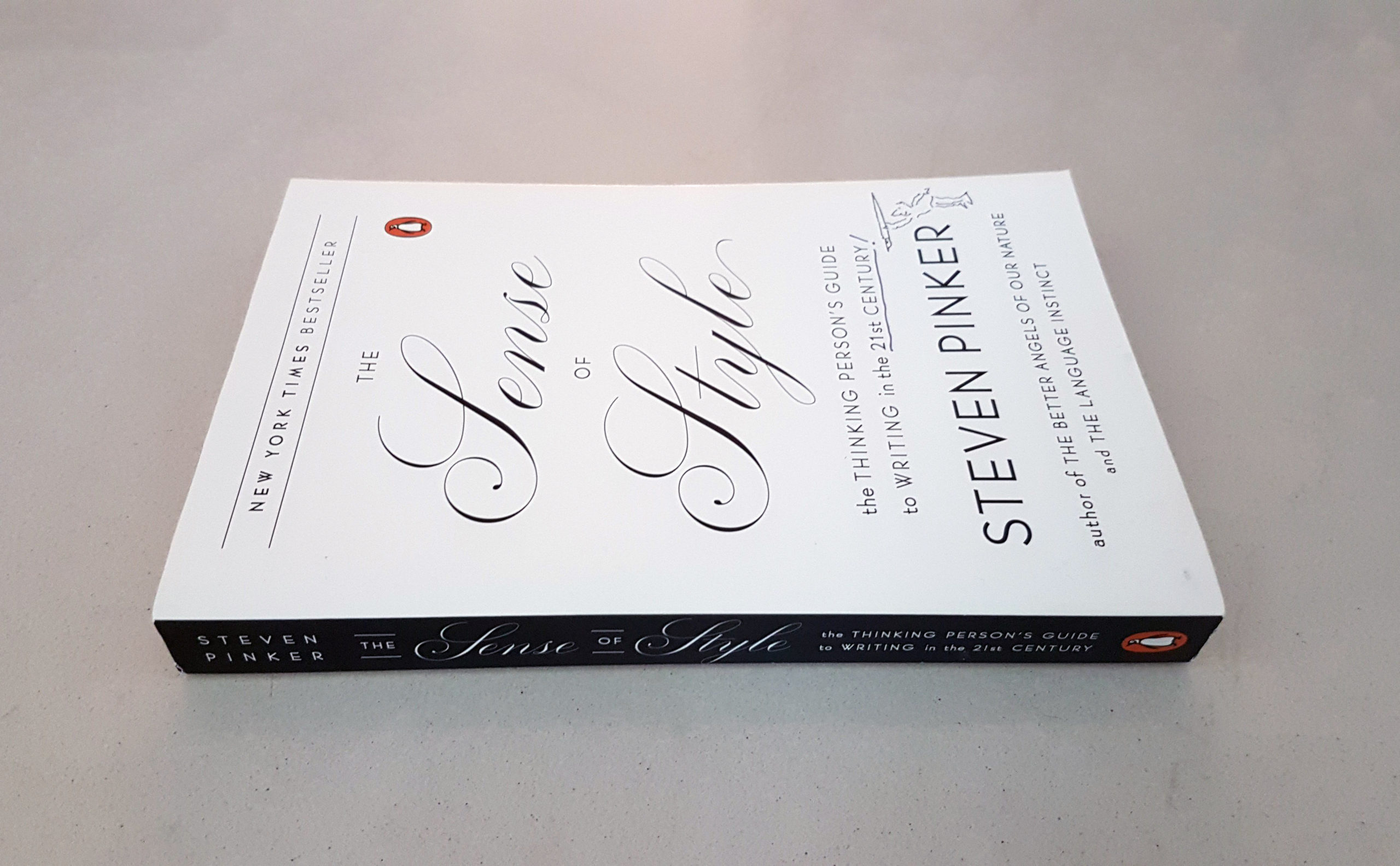 The Sense of Style by Steven Pinker

I cannot wholeheartedly recommend Steven Pinker’s style-guide / usage manual, but it does have a couple of important things to say about written English.

Respect Your Tools
Language has its own internal logic. Good writing respects that logic. Writers should study grammar explicitly rather than rely on intuition in order to communicate clearly, show respect for their readers, and inspire confidence in their work. Good writers are those who read widely enough to absorb good practices from a longstanding written English tradition. They know the rules but also when to break them.

Break the Rules
The Ancient and Venerable English Teachers’ Code—beloved by Grammar Nazis, Prescriptivists, Fussbudgets and Curmudgeons—is more what you’d call guidelines than actual rules, and some of the guidelines will lead you astray because (a) Some were written by people who didn’t understand English and (b) Thanks to natural and inevitable language change, the English we use today differs from the English of the past.

See below for more details about what I liked and what I didn’t like about Steven Pinker’s The Sense of Style.

What I didn’t like about The Sense of Style

The Tone
Steven Pinker has a reputation for being very smart and yet writing in an accessible way. There’s something I don’t 100% like about his tone, though; something vaguely condescending.

Once in a while Pinker actually heaps disdain on the hypothetical purist reader:

If you insist on We’ve created a Frankenstein’s monster! you probably also popped champagne on Jan. 1, 2001, wondering where all the other revelers were. (“You see, there was no Year 0, so the third millennium really begins in 2001…”) Give it up. (265)

If you want to attack such a ridiculous strawman, fine. But don’t use the pronoun “you” to refer to him. Then it sounds, grammatically, as if you are mocking the reader who bought your book. Bad idea.

Old Hat
The Sense of Style was disappointing in part because it covers ground I’ve been over before. I suppose I’ve read so many language books that I’m starting to exhaust the genre; there’s not much to be said that hasn’t already been said before. (In fact, some of it is said in the other book I started reading around the same time, Bad English, which has a similar ethos.)

However, a good third of The Sense of Style (pages 186 to 304) is a list of usage “rules” (some upheld, some rejected). I wasn’t expecting that. I’ve stopped buying books that are just lists. I put them in the bathroom, which is the only place I can read them and feel entertained, and it takes forever to get through one.

The last fifty pages (pages 305 to 359) are backmatter: acknowledgments, a glossary which I don’t need, notes on sources, a list of references (where I might hope to find titles of related books I don’t yet own—and might want to own, unlike this in-joke from 1971, of which a small sample is quite enough), and an index. It all serves a purpose, but it takes up an awful lot of space.

Layout
Many of Pinker’s examples are embedded in paragraphs. I think I would have appreciated a more textbooky style with more of the example sentences (right and wrong) displayed on their own lines and discussed above and below.

I know I just said I didn’t want examples to be embedded and explained in paragraphs, but if this table format is the only alternative, I take back what I said. This is definitely worse: 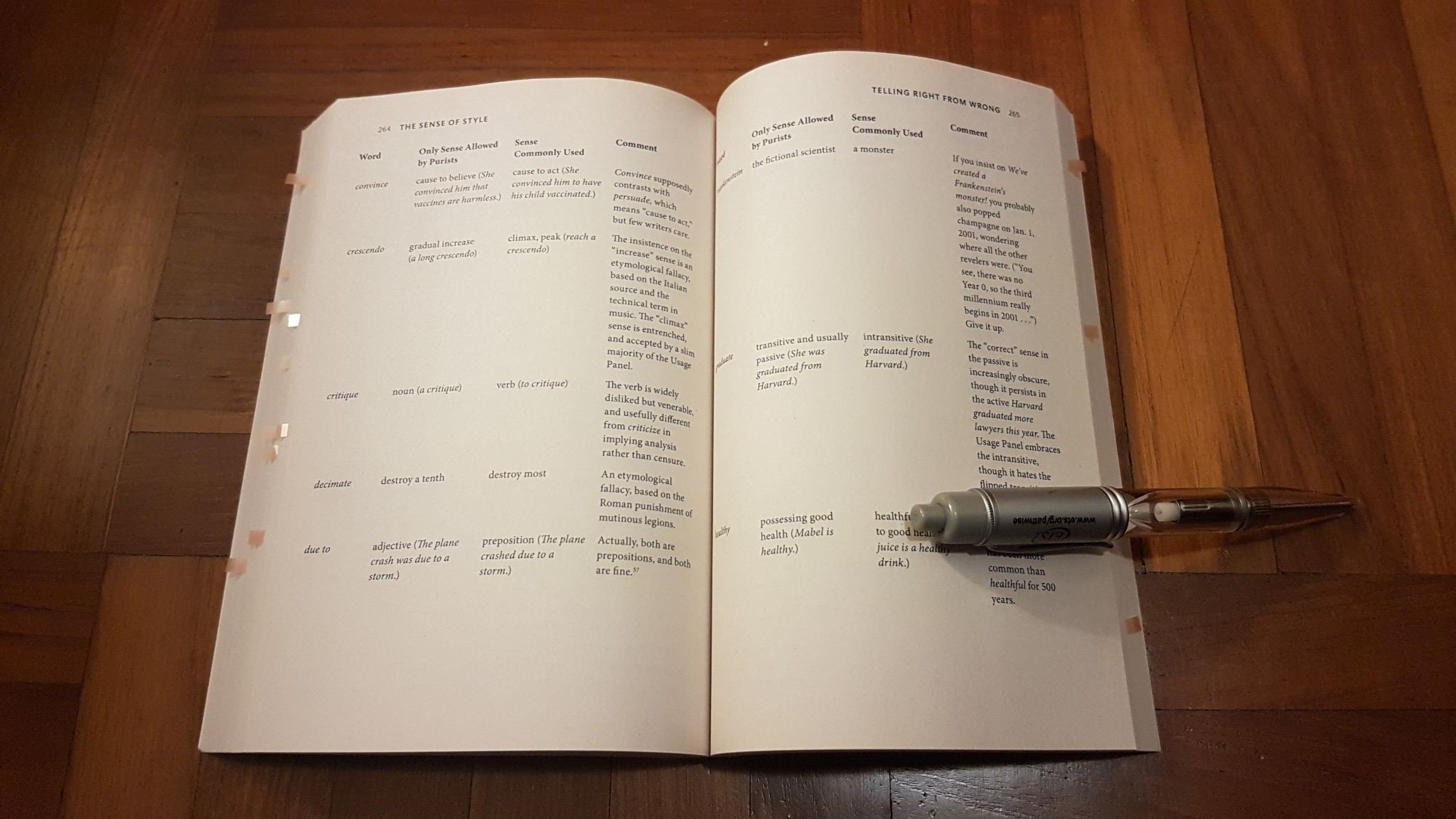 That text-wrapping in the right-most column is awkward, no?

I don’t much like the linguistics-style tree diagrams either. There are, surely, other ways of diagramming sentences that are more compact and intuitive. These trees have a jargony academic flavor for me because I had to create them in MS Word in college for syntax class (ick). Those with no such experience might lack the negative feelings I associate with syntax trees, but they might also lack the necessary background to appreciate the information encoded in them. 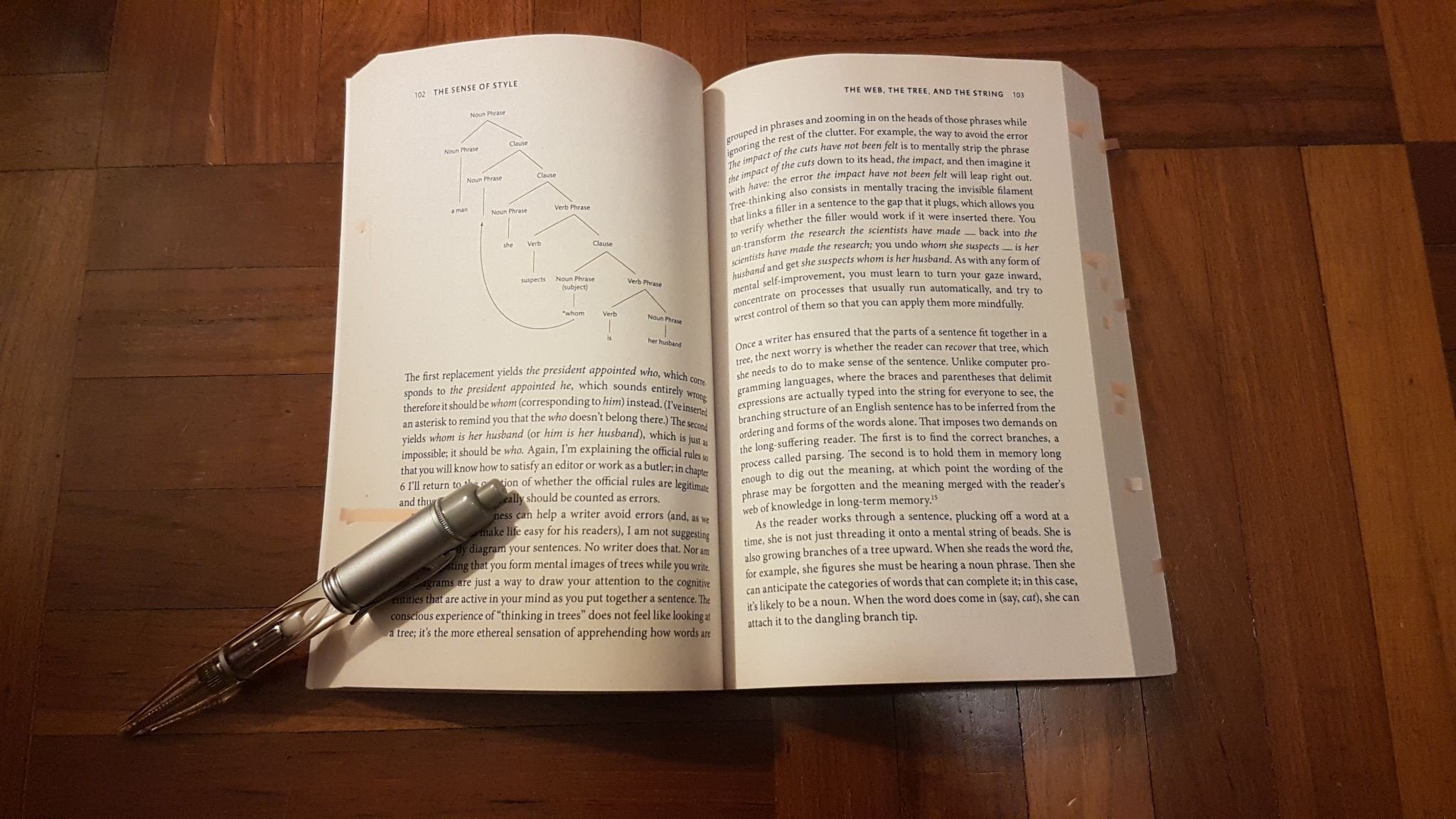 [A] few common errors are so uncontroversial—the run-on sentence, the comma splice, the grocer’s apostrophe, the comma between subject and predicate, the possessive it’s—that they have become tantamount to the confession “I am illiterate,” and no writer should be caught making them. [T]he problem with these errors is… that they betray a history of inattention to the printed page. (285)

It insists that good grammar matters.
Pinker says, “[T]he unconscious mastery of language that is our birthright as humans is not enough to allow us to write good sentences” (78). Pinker likens learning grammar and grammar words to learning the tools and jargon of any profession. He adds that language is interesting in its own right, and learning about it should not be considered a chore.

Still another reason to care about usage is to ratify a certain attitude to language. Careful writers and discerning readers delight in the profusion of words in the English lexicon, no two of which are exact synonyms. Many words convey subtle shades of meaning, provide glimpses into the history of the language, conform to elegant principles of assembly, or enliven prose with distinctive imagery, sound, and rhythm. Careful writers pick up the nuances of words by focusing on their makeup and their contexts over the course of tens of thousands of hours of reading. Their readers’ reward consists of partaking in—and, if they themselves write, helping to preserve—this rich patrimony. (197)

It reminds me that there are people who think good grammar matters.
Pinker talks about The American Heritage Dictionary’s Usage Panel (which, of course, he’s on). The panel decides what counts as good and bad usage for the purposes of updating the dictionary. Members answer survey questions to document the preferences of a theoretically representative community of well-educated readers and writers.

It names something I needed a name for.
“Left-branching” sentences and noun phrases are hard for humans to understand, but that doesn’t stop us creating them as headlines, product names, or industry terms. When I found a couple of examples on notice signs, namely Bicycle Clearance Exercise Notice and Lift Display Panel Notice, I didn’t know what to call them. On page 111 of The Sense of Style, Pinker says these are called “noun piles”. Good to know.

It honors neologisms that are handles for new concepts.
It’s easier to think and talk or write about a class of things (such as noun piles) when you know its name.

In a very real sense such neologisms make it easier to think…. It is foolish, and fortunately impossible, to choke off the influx of new words and freeze English vocabulary in its current state, thereby preventing its speakers from acquiring the tools to share new ideas efficiently. (239)

It made me laugh.
I love a good language joke. Here’s one from The Sense of Style that I particularly liked.

It sidesteps the prescriptivist-descriptivist debate.
There is an ongoing fight between people who believe in Language Rules and people who believe There Are No Rules, Only Language. Pinker uses a single word to lump all the combatants together when he says, “Once you understand that prescriptive rules are the conventions of a specialized form of the language, most of the iptivist controversies evaporate” (192). I don’t know if ‘iptivist’ is Pinker’s word or someone else’s, but it’s genius. Actually you know what, I think it is his, from a 2012 Slate article on the so-called Language Wars, an article which was—obviously, now that I’m reading it—used as the basis for the start of Chapter 6.

At the end of The Sense of Style, Pinker gives five good pieces of advice, which I paraphrase thusly:

Beware fake news. Using bad data invalidates your argument, as does jumping to conclusions without proceeding step by step. Moral arguments, in particular, should be substantiated.

Don’t overgeneralize. All generalizations are false, especially if you’re generalizing from your own experience. That’s availability bias! Moreover, the plural of anecdote is not data.

Don’t treat every issue as a two-sided coin. Beyond thesis and antithesis, there’s synthesis. In particular, “There is no dichotomy between describing how people use language and prescribing how they might use it more effectively” (303).

Attack ideas, not people. An ad hominem attack is not a reason. Be humble and be willing to be wrong, and don’t assume the other guy has bad intentions or corrupted motivations.

Although Pinker sounds like he’s talking primarily about non-fiction writing, writers of fiction would do well to heed what he says about sentence construction, word choice, punctuation, and so on. Words and sentences are the tools of all writers, not just those constructing an argument, and should be treated with respect.