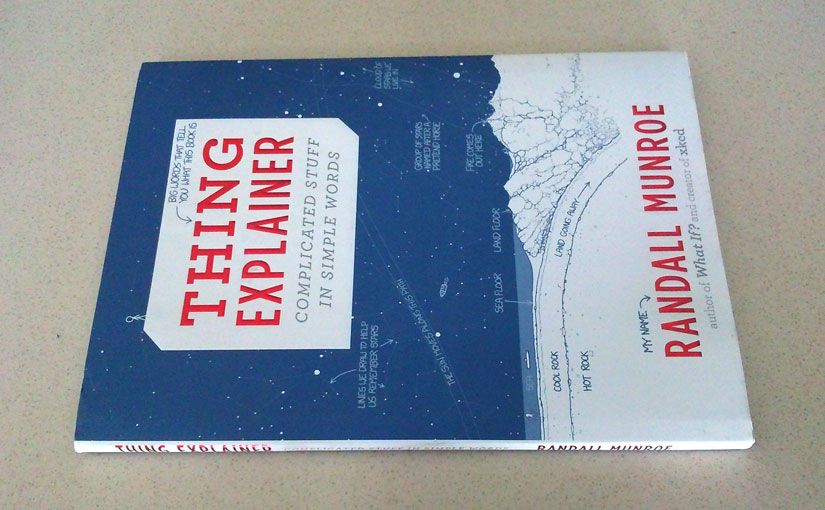 To create Thing Explainer, Randall drew and labeled pictures to—well—explain various scientific and cultural ideas, but he chose to write all the text in the book using only a thousand commonly-used English words, just like he did when he published the comic “Up-Goer Five”.

Using the tool he made, you can write like that, too. Um, that is, you can try. (Good luck.)

The book straddles the border between humor and science. On the one hand, transforming simplified English labels back into conventional ones makes us chuckle; sometimes the “simple” labels are quite obscure, thus deciphering them can be both tricky and rewarding, like the word game Taboo. On the other hand, the simplified English goes a long way towards actually explaining things; science books sometimes raise as many questions as they answer because the explanations in them use terms that are as unfamiliar to readers as whatever the terms are intended to explain.

I think the book is best understood as Randall’s clever way of explaining stuff he knows about to clever people who might or might not know as much as he does on the subjects he chose to address. Seen in this light, the book helps us appreciate the power of words as flexible, useful tools in the hands of a talented wordsmith, and gives us the sense that, in principle, there is nothing anywhere in the universe (including the sun) that can’t be explained in an approachable way.

See below for when and why I read the book, and a list of the explained things.

When and Why I Read It

I have been a fan of Randall Munroe’s webcomic XKCD for years. (This comic is my absolute favorite.) I wasn’t really interested in Randall’s book What If?, but when I saw his latest foray into print publishing, it looked amazing. So I bought it. It is amazing. This is the author “photo” on the dust jacket flap. Nice one, Randall.