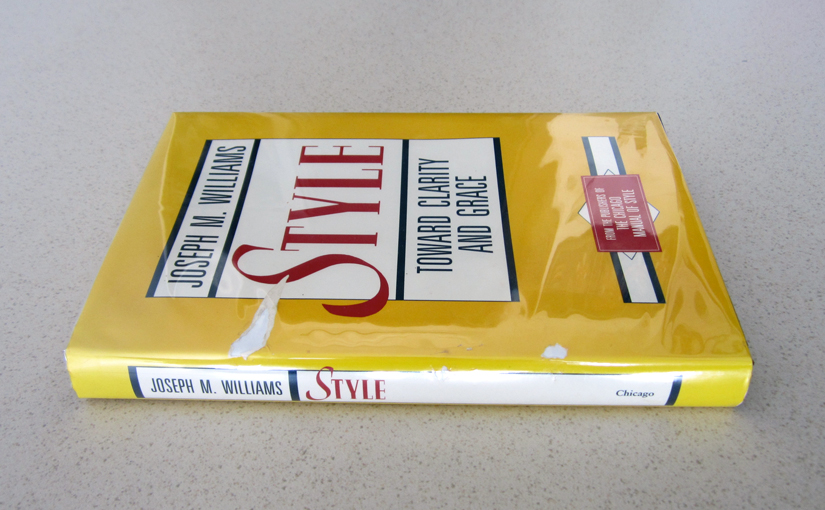 I never thought I would read the word “turgid” so many times in my entire life. Style: Toward Clarity and Grace repeats the word, of course, because it’s telling you how to avoid writing “turgid prose”.

There’s a lucid chapter on the subject of usage, which deftly cuts through all the normal chatter about what should be a rule and why or why not, but most of the book is not about controversial words and grammatical constructions. It’s about what makes a passage understandable, and it describes the process of transforming one that’s not into one that is. It’s describing the acquisition and communication of concepts and knowledge as much as anything. It’s almost a book of cognitive psychology. I have a lot of books on language and writing, but I don’t think I’ve ever read anything like this before.

Maybe that’s because it was originally a textbook. It feels a bit strange to watch someone poke sentences and move bits of them around on the page; the skills being described can only really be improved through use. This version of the book is informative, but perhaps not as effective as the versions that give the reader practice writing and revising.

More on what I liked about the book and when and why I read it below.

Bits of insight from
Style: Toward Clarity and Grace

We signal that we are members of a community in what we say and how we say it. But a more certain sign of our socialization is in what we don’t say, in what we take for granted as part of a shared but rarely articulated body of knowledge and values.

When you combine negatives with passives, nominalizations, and compounds in sentences that are already a bit complex, your writing can become opaque[.]

On page 141, Williams explains a method for eliminating a vague “which”. I think he invented the term ‘summative modifier’ for this technique at some point in his career, though presumably the technique itself was already in use. The idea is that you use a noun as a kind of appositive to refer to the entire preceding clause (rather than to some specific noun). I’m not sure whether I thoroughly like sentences that use this technique, but they’re better than the ones that use the vague “which”.

On page 157, Williams gives a logical explanation for the existence of a much disputed “rule” of English writing:

Prepositions are very light—one reason why we sometimes avoid leaving a preposition at the end. Sentences should move toward strength; a preposition can dilute that strength.

Of metaphor, Aristotle wrote, “By far the greatest thing is to be a master of metaphor. It is the one thing that cannot be learned from others. It is a sign of genius, for a good metaphor implies an intuitive perception of similarity among dissimilars.”

The section on Usage delves into important sociolinguistic issues.

Standard written English is not a device invented and maintained to preserve for those who control it their social status and economic privilege. In fact, a standard written language eliminates a major occasion for a prejudice that has afflicted large numbers of societies…. To achieve socially vicious ends, some will discriminate on the basis of any difference, linguistic or otherwise.

Navigating that last category is a minefield. Williams advises careful writers to learn all the rules out there—and the reasons for them—so that we can make informed choices about when to obey them and when not to.

On page 194, Williams tackles the use of generic ‘he’ and offers writers a choice among several alternatives without insisting on any one of them. The writer must decide what’s best in context.

The impulse to regulate—and by regulating fix—language has a long tradition, not only in the English-speaking world, but in literate cultures everywhere. It is an impulse usually rooted in the fear that when language changes, it is usually for the worse; that if language changes too quickly, we will eventually lose touch with our written tradition.

On pages 196–97, Williams says educated speakers fear that their carefully chosen words will fall from their mouths as unnoticed as trees in a deserted forest:

[W]e invest a great deal of effort in learning our standard forms of speech, and then in mastering the fine points that, we are told, distinguish careful, responsible English from the language of those who are crude, careless, and threatening. After investing so much time learning so many idiosyncratic points of usage (particularly spelling), we are hardly going to accept the language of those who did not similarly submit themselves to the discipline of spelling tests, parsing drills, and diagramming exercises. As much as we might fear for our language, we fear as much for the social return on our investment…. The social utility of idiosyncratic rules is precisely in their idiosyncrasy. It guarantees that they will be mastered only by those with the time and desire to do so.

On page 197, Williams defends usage choices as expressions of a writer’s individuality:

[M]ost of us choose among these items not because we believe that we are defending the integrity of the English language or the quality of our culture, but because we want to assert our own personal style. [Usage choices] let those among us who wish to do so express their refined sense of linguistic decorum, a decorum that many people believe testifies to their linguistic precision. It is an impulse we ought not to scorn, when it is informed and thoughtful.

Some cultivate discernment in food, wine, or fashion—none of which matters to me half as much as words.

When and Why I Read
Style: Toward Clarity and Grace

This is a practical writing book from the publishers of The Chicago Manual of Style. It got bumped up my list when I saw it endorsed by Stephen Pinker in The Language Instinct.

Also available as a 2016 textbook: Style: Lessons in Clarity and Grace (12th edition)