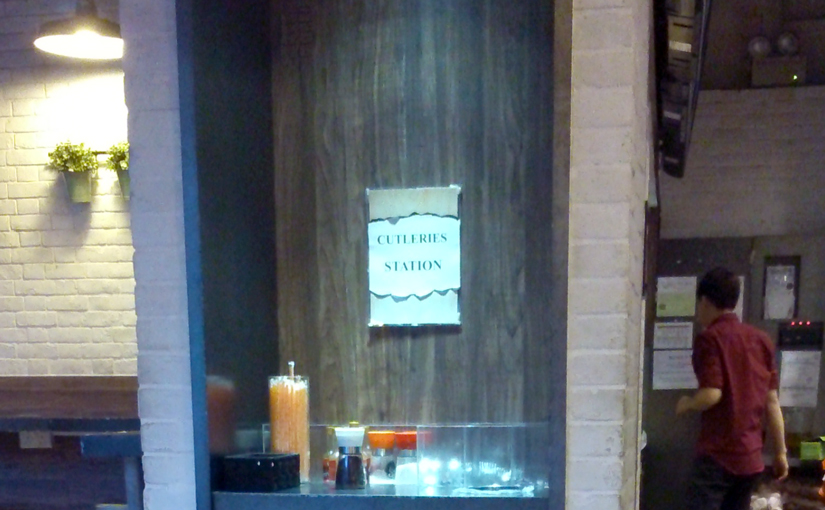 I took this (lousy) photo of a sign that says “Cutleries Station” at Soup Spoon in Novena.

In modern standard British and American English, “cutleries” is not a word. (Neither is “equipments”.)

What makes this example interesting is that it raises another issue: whether we use singular or plural nouns as “noun adjuncts” or “attributive nouns”.

In other words, which is correct?

Obviously, the machine would contain more than one drink, so using the plural is more “logical”, but it sounds horrible to me. Wikipedia says that the singular (or the possessive) is traditional in most cases, but that plurals are gaining ground.

I’ve seen several (many?) signs in Singapore that say “Children Playground” rather than “Children’s Playground”, which is doubly silly since those signs should probably just say “Playground” anyway. (This one is in the complex where I live. At least “Residents’ Lounge” is correct.)

If you think “Children Playground” sounds awful, don’t laugh too hard. Whoever named the 2002 romantic comedy Two Weeks Notice neglected to include an apostrophe after “weeks”, unleashing a wave of scornful critique from movie-going fussbudgets. Apparently, educated native speakers working in the media and entertainment industries, even if they don’t misuse singulars and plurals, still struggle to distinguish plurals from possessives when modifying nouns with other nouns.

English is not easy!