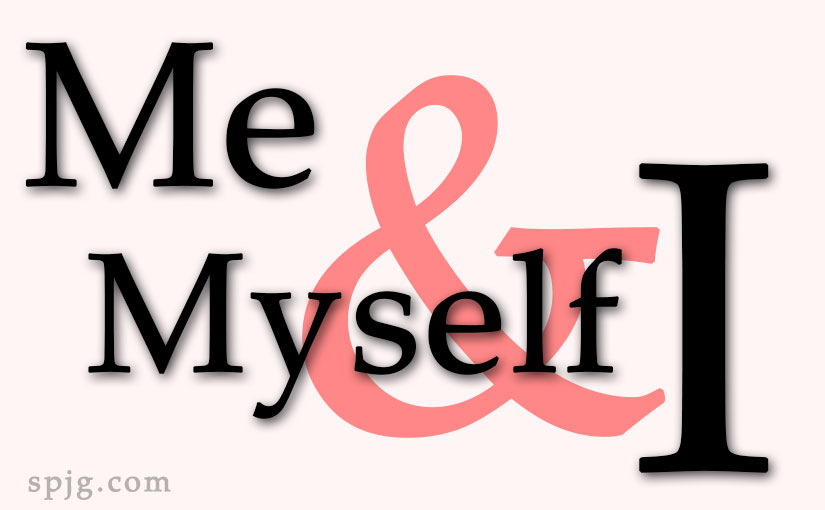 English grammar: How to use pronouns ‘I’, ‘me’, and ‘myself’

The first-person singular pronouns of English are ‘I’, ‘me’, and ‘myself’. Although in daily speech people have been known to use them somewhat interchangeably, IMO it’s worth knowing which roles those different words are supposed to play in a sentence.

Give yourself a quiz. Read each of the sentences below and decide whether it is grammatically correct.

Answers and explanations after the jump. …and there’s the jump, folks.

The horse is gorgeous…
but the sentences are all grammatically incorrect.

The horses were trained by Sylvia and myself.

The horses were trained by Sylvia and me.

Me and Sylvia sold the horses to a riding school.

Sylvia and I sold the horses to a riding school.

The boss split the profit between Sylvia and I.

The boss split the profit between Sylvia and me.

If the corrected sentences sound better but you’re not sure why, or if they don’t sound better to you, continue reading below.

‘I’ is a subject pronoun. The grammatical subject of a sentence is the person doing the action.

It’s easy to use ‘I’ correctly if there’s only one person doing the action:

I trained the horses.

People get confused when there’s another person doing the same action.

Me and Sylvia trained the horses.

Sylvia and me trained the horses.

Sylvia and myself trained the horses.

Myself and Sylvia trained the horses.

I and Sylvia trained the horses.

Sylvia and I trained the horses.

‘Me’ is an object pronoun. The grammatical object of a sentence is the person to whom the action is done.

Again, it’s easy if there’s only one person towards whom the action is directed:

The boss thanked me.

People get confused when the sentence has a compound object constructed with ‘and’:

The boss thanked Sylvia and I.

The boss thanked Sylvia and myself.

The boss thanked I and Sylvia.

The boss thanked myself and Sylvia.

The boss thanked Sylvia and me.

I think it’s also more or less okay to say “The boss thanked me and Sylvia,” but perhaps it’s more conventional to politely put yourself at the end, just as it is when using the subject pronoun ‘I’.

The astute among you have perhaps noticed that the examples above only deal with the direct object of the verb. You should also use ‘me’  when the pronoun is part of the indirect object.

The boss sent the paperwork to me.

The boss sent the paperwork to Sylvia and me.

How to use ‘myself’

‘Myself’ is a reflexive pronoun. It is used when you have a subject and object referring to the same person, or to emphasize the subject.

I told the buyers all about myself.

I cleaned out the stalls by myself.

I finished the paperwork myself.

However, people have started using ‘myself’ as a seemingly more formal version of ‘I’ or ‘me’.

Sylvia and myself are always available to answer questions.

You can always ask Sylvia or myself.

Sylvia and I are always available to answer questions.

You can always ask Sylvia or me.

How to use ‘me’ (as the object of a preposition)

In informal speech, especially in some dialects of English, people often use ‘me’ instead of ‘I’ in the subject of a sentence.

Me and Sylvia trained the horses.

Teachers have tried so hard to counteract this kind of error that some people now say the equivalent of ‘Sylvia and I’ even when they should say something like ‘Sylvia and me’.

The boss thanked Sylvia and I.

An attempt to avoid an error that results in another error is known as hypercorrection.

Hypercorrective errors with first-person pronouns often involve prepositions. After a preposition, use ‘me’.

The sale was arranged by Sylvia and me.

The buyers toured the stable with Sylvia and me.

The profit is all for Sylvia and me.

The newspaper wrote an article about Sylvia and me.

All these should sound good because you would naturally use ‘me’ if Sylvia were not in the sentence. (Drat that Sylvia. She makes everything so complicated.)

The most notoriously confusing preposition is ‘between’. It requires ‘and’ because you can’t be ‘between’ only one thing, but as soon as you see ‘and’, that pesky hypercorrective tendency kicks in and you feel tempted to use ‘I’ instead of ‘me’. Resist the temptation!

The boss split the profit between Sylvia and me.

Pronouns are words that replace nouns.

In this post we’re talking about personal pronouns, so all the nouns being replaced are people. (It’s not really clear who ‘I’ is replacing in the examples above, since I’ve never trained or sold a horse. You can pretend that the noun being replaced is ‘Meredith’.)

English does not capitalize common nouns such as ‘woman’ or ‘horse’. (Don’t laugh, German does! And English used to, at least sometimes!)

The subject of a sentence is the person doing the action.

The (direct) object of the sentence is the person the action is being done to.

The indirect object of the sentence is the person the action is being done towards.

A preposition is, literally, a word that is ‘positioned before’ a noun.

*The sentence has a compound subject. It is made up of two nouns joined by a conjunction. The two nouns are the proper noun ‘Sylvia’ and the pronoun ‘I’.

Are you skimming? Was that too much detail?

Stop scrolling and study the following three rules of thumb for ‘I’, ‘me’, and ‘myself’:

If you are a fiction writer, feel free to have your characters and/or narrator speak in any way that sounds characteristic of the target style. If you are simulating daily speech, rules of correctness can go jump in a lake.

If in real life the people around you use an informal style of speech that does not follow the conventions set out above, feel free to copy them to fit in or to avoid causing offense or confusion. (Some of us do this more or less unconsciously.) Unless you’re a dyed-in-the-wool grammar nazi, social rules trump grammar rules.

In a sense, the people you’re talking to determine what’s acceptable, not me or you or any number of English teachers. English is a mess, and no one’s in charge. There are no absolutes, only different sets of conventions, each of which has a different purpose, audience and context. Moreover, the conventions themselves are subject to change.

All of which is to say, I’m both a prescriptivist and a descriptivist: someone who believes both in learning “the rules” and in disregarding them.

There’s a lot more in my head than on my blog, but here’s what I’ve got so far: